EKO EXPORT S. A. specializes in acquiring and selling microspheres. The company imports the raw material mainly from Russia, Kazakhstan and Poland, where, after processing at the production plant in Bielsko-Biała, it directs nearly 100% of its production for export, mainly to Europe and the USA.

The leading specialization of the Company is the production of microspheres with the highest added value, refined, with parameters individually tailored to the specific requirements of customers, where the highest profitability is noted. As a result, the Company was able to build unique industry competences that will be extremely difficult for its competitors to achieve.

The key industry feature of EEX is fact that the production of microspheres is the Company's core activity and the only strategic development priority.

The concentration of core business on microspheres has resulted in the development of unique competitive advantages by the Company, which most of its market rivals do not have.

ensuring, through long-term contracts with strong partners, stable presence of EEX on the world's largest regional microsphere markets very active trade policy translating into dynamic market expansion of the Company, including increasing the size of the customer portfolio and expanding the geographical scope of operations building lasting relationships with customers, based on quality aspects
4

At present, EEX is ranked among the world's leading companies in the microsphere industry. In Europe, EEX is the largest company of its kind; there is no other company in the region whose production capacity and level of technological advancement comes close to the parameters achieved by the Company.

Produced ceramic microspheres (silicon-alumina) are obtained, among others, during hard coal combustion, where they constitute one of the fly ash fractions. From the production cycle point of view, ceramic microspheres are therefore one of the types of combustion waste which are produced to the greatest extent by the energy sector based on traditional hard coal technologies. Procurement of raw material in the Eko Export S.A. industry is therefore based on cooperation with coal-fired power plants, for which microsphere is waste.

When coal is burnt at the edges of the high-temperature zone, the plastic slurry forms granules (bubbles) 0-0.5mm in diameter with gas inside. When the granules (microspheres) are transported with the slurry to the settling pond, they float to the water surface.

The traditional way of obtaining microspheres is to fish them out of the lagoon (sedimentation pond) and direct them to a dripping chamber made of tarpaulin, thus losing excess water. After long enough seasoning, when water content drops to about 20%, microspheres are packed into polypropylene bags and in this form sold for further processing.

EEX owns a unique patented technology for the recovery of microsphere from the water-ash directly from the pipes discharging the sludge produced after burning coal at the power plant in Nur-Sultan - the capital of Kazakhstan.. This line allows the recovery of almost all (about 95%) of the microsphere produced at the power plant throughout the year. The raw material obtained is characterized by excellent physical and chemical parameters of unprecedented purity on the market. The microsphere is obtained before it enters the lagoon (sedimentary pond), so it is free of any mineral impurities that are present in large quantities in lagoons. In comparison, with traditional pumped fishing from sediment ponds, only up to 20% of the microsphere can be collected, and the process is limited to the warm season as the sediment ponds freeze during the winter.

THE ACTIVITY OF THE FACTORY

The activity of the Factory brings very beneficial ecological effects in the form of almost complete reduction of harmful waste generated in the power plant.

Microspheres in waste, i.e. the so-called spherical hollow grains with a tight, glassy coating, constitute from 1% to 3% of the total waste mass. Due to their structure, they have special properties with a significant negative impact on the environment. The bulk density of spherical grains is lower than the density of water, which causes them to float to the surface of settling ponds during hydraulic storage, forming the so-called "dross" several dozen or even several dozen centimeters thick. This dross dries out quickly and then the grains are carried away by the wind and carried away for considerable distances.

The microsphere extraction line itself has a neutral impact on the environment, as it does not use harmful raw materials or components.

High operating efficiency and quality of the obtained raw material make EEX technology innovative on a global scale, thus providing a significant, long-term competitive advantage over companies operating in the industry from all over the world.

EEX's business activity covers the full value chain in the microsphere industry. This means that the Company's expertise covers all operational phases - from the acquisition of raw material to the delivery of the finished product to final customers:

EEX is a global company and a player in the world microsphere market. The Company's sales markets include European countries and, among others, the United States, Brazil, South Korea, Taiwan and Japan. EEX's customers are the largest players on the global microsphere market. Most of them are international corporations, with whom the Company establishes stronger and stronger relations. This is evidenced by an increase in the number of renewable contracts and an increase in the number of long-term contracts. As a result, the Company has a guaranteed market for its products in the long term and an unthreatened competitive position.

EEX operates in a very innovative industry.Microsphere, in the production of which the Company specializes, is a modern industrial material with multiple applications in industry. It is constantly undergoing intensive research and development, thanks to which the spectrum of microsphere applications is systematically expanding. Therefore, the market on which EEX operates belongs to the group of emerging markets with very high growth potential.

An additional stimulus for the microsphere market development is the fact that it is a pro-ecological product.Production of microspheres is a form of utilizing some of the most troublesome post-industrial waste generated during combustion of hard coal. Microsphere, as one of the fractions of volatile waste, is on the list of waste recommended for industrial use in the EU, and its management has been classified as environmentally friendly "clean technology". Therefore, the development of microsphere technology will also be stimulated by the environmental policy instruments of the energy sector.

Jacek Dziedzic – President of the Board

Jacek Dziedzic is a co-founder of EKO EXPORT and has been holding the position of the President of the Board since the company was established. Managerial skills supported by his ong-term experience are combined with in-depth technical knowledge of microsphere production and personal contacts among the company's eastern suppliers.

Jacek Dziedzic has a higher education. He graduated from the Technical University of Lodz, Faculty of Textile, Mechanical Fiber Technology.

Co-founder of EKO EXPORT since 2003 involved in business development of the company. European pioneer in production of refined microspheres. In the 80's he developed technology of microsphere refinement allowing for significant reduction of production costs. In the 90's he was responsible for building Lang's sales network in Austria and Germany.

Zbigniew Bokun holds an incomplete higher education. He started studies at the Silesian University of Technology in Gliwice, Faculty of Sanitary Engineering.

Marek Kwiatek – Chairman of the Supervisory Board

Mr Marek Kwiatek is a graduate of the Faculty of Management at the University of Economics in Katowice.

He gained experience in financial institutions and manufacturing companies. He started his professional career in 1995 at Huta Ferrum S.A. in Katowice. There he was a specialist for controlling and budgeting. His tasks included analysis of financial statements, preparing business plans and budgets. Since 2007 he was a Financial Director in Murapol S.A. He supported the Management Board in decision-making processes aimed at achieving specific business objectives and the Company's strategy and, among others, supervised the implementation of IAS-compliant financial statements. Since 2008, he has been working for Zakłady Mechaniczne BUMAR where, initially, he was a Member of the Management Board for Financial Affairs of Bumar-Łabędy S.A. (in 2008-2011), and then he became the President of the Management Board of Bumar-Mikulczyce S.A. (years 2011-2016). In 2016-2017 he served as the President of the Management Board of Gliwice Sports Club "Piast" S.A. supervising the formation and implementation of the company's business strategy.

Mr. Marek Kwiatek has many years of experience as the Chairman of the Supervisory Board - he performed this function in 2009-2013 in Kuźnia Łabędy Sp. z o.o. and in 2009-2011 in Zakłady Mechaniczne Bumar-Mikulczyce S.A.

Mr. Marek Kwiatek is a member of the Supervisory Board fulfilling the criterion of independence specified in principle II.Z.4. of "Best Practices of WSE Listed Companies 2016".

Igor Bokun – Vice Chairman of the Supervisory Board

Igor Bokun has a higher education. He graduated from the Stanisław Staszic AGH University of Science and Technology in Kraków, Faculty of Electrical Engineering, Automatics and Electronics, majoring in Computer Science.

Apart from a broad legal practice in the scope of civil and criminal law, he is a legal advisor to a number of companies, i.e. District Tourist Management Team PTTK in Bielsko-Biała, Sanitary and Epidemiological Station in Żywiec, Greenline sp. z o.o.

Mr. Janusz Hańderek is a member of the Supervisory Board meeting the criterion of independence specified in principle II.Z.4. of "Best Practices of WSE Listed Companies 2016".

Andrzej Hugiel – Member of the Supervisory Board

Mr. Andrzej Hugiel is a graduate of Sanitary Engineering Faculty of Silesian University of Technology in Gliwice. He started his professional career at Fabryka Samochodów Małolitrażowych and Zakład Remontowo-Budowlany FSM as a sanitary installations inspector and installations works manager. From 1975, he was a construction team manager at the Katowice Municipal Engineering Combine in Bielsko-Biała. In the years 1976-1989 he worked as an environmental protection inspector at the Environmental Research and Control Center and the Provincial Office in Bielsko-Biała. Since 1989 he worked in several companies dealing with environmental protection as an environmental protection specialist and deputy director for technical matters. Between 1994 and 2003 he ran his own business in the furniture industry. From 2006 to 2018 he was employed at DAZI Investment in an administrative position.

Mr. Andrzej Hugiel is a member of the Supervisory Board fulfilling the criterion of independence specified in principle II.Z.4. of "Good Practices of Companies Listed on WSE 2016"

Agnieszka Bokun – Member of the Supervisory Board

Agnieszka Bokun has completed secondary education. She graduated from A. Asnyk High School in Bielsko-Biała. She also completed EDV AUSBILDUNG SCHULE in Vienna, gaining qualifications of a Programmer.

The project is to support the entrepreneur to ensure financial liquidity and support current operations due to financial difficulties faced by the entrepreneur as a result of the COVID-19 outbreak. Financial assistance provided under Scheme No. SA.57015 (2020/N).

Development of an innovative product with very high mechanical strength based on microspheres:

The objective of the project is to develop a production technology and implement an innovative material called TitanSpheres, obtained from commercially available microspheres. The new product will meet stringent quality requirements, which will expand the possibilities of using microspheres in the mining industry. One of the basic requirements for commercial microspheres is their mechanical strength. Determination of mechanical strength of microspheres consists in subjecting them to pressure of 2.05 MPa for 15 minutes. The compressive strength of microspheres is measured as the proportion of water-lighter fraction expressed in mass percentage after the pressure test. Natural microspheres isolated from fly ash currently offered on the market have strength at the level of 35-48% m/m. The objective of the project is to develop a technology to produce a material called Titan Spheres, for which the proportion of the fraction lighter than water after a compression test will be >=60% m/m.

The effect of the conducted research will be the concept of modification of the technological process of preparation and refinement of raw microsphere material, allowing to obtain a super strong material in terms of mechanical strength - TitanSpheres. 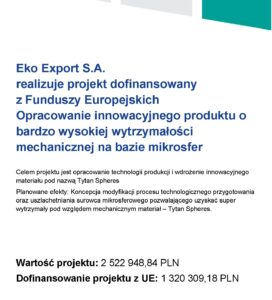 European business
One man’s waste is another man’s gold

Eko Export excels in the USA